My babies. Aren’t they beeaauutiful? 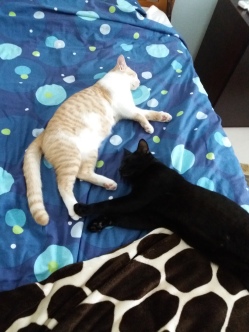 They like to nap together…though these are all kind of old pictures (but only relative to their baby lives). They are now 1 year and 4 months old. And the pictures are from when they were just 7/8 months old. I have a scarily precise virtual filing system for them.

For non-Fizzles, allow me to introduce you to Kamino and Kaidu.

Kamino is our little panther. Though he’s kind of more like a tiny black bear. But very non-scary unless you’re superstitious. The majority of our name ideas did in fact originate from Star Wars – and this particular one was SFizzle’s contribution. Tis also the name of her house Wi-Fi. Named after our cat. Not the planet.

Kaidu is often mistaken for a girl which I really really don’t understand. Anyway, he is a very very funny cat. It took a 3 week long break from me (at 8 months old) for him to stop suckling people’s fingers for comfort. It’s not even that he doesn’t try to do it anymore, but he’s just forgotten how so this poses challenges for him. Most things are very challenging for him. Except apparently catching birds and eating butterflies. This, he can do. Perhaps a testament to his name sake… 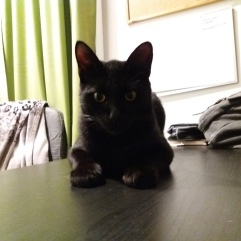 This is just how Kaidu is…

They are currently under the care of the Parent Fizzles as brother and I are 6,000 km away from them.

However…we have recently befriended a Malamute…