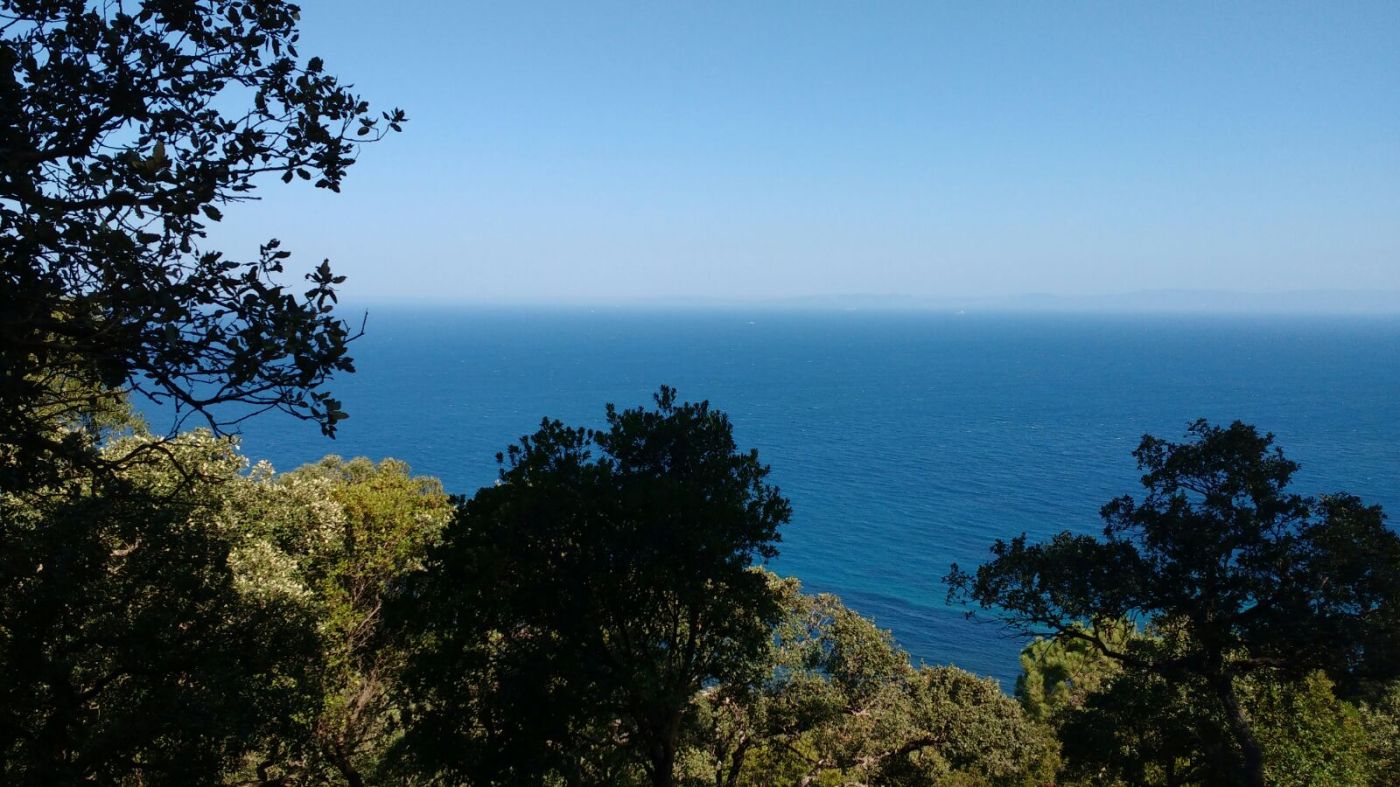 Alhamdulillah we are here in Tangier, Morocco. It is a different world over here. A gentle initiation into non-big-city-dwelling. 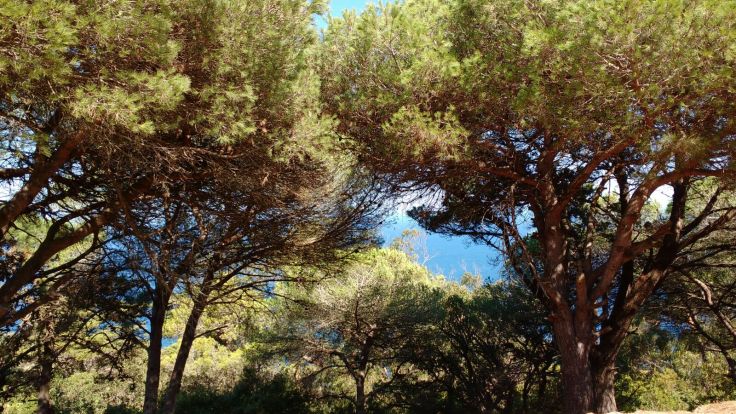 We arrived here a week before Eid-ul-Adha,  or as they call it here l’Aid-el-Kabeer. Little did we know that this is the biggest holiday in Morocco, the only time of the year when all the shops close. The baker, the butcher, the corner stores, the restaurants, the taxis. For days.

It was a new experience for all of us. None of us had ever seen the sacrifice of Eid-ul-Adha before. We saw our neighbours doing their 2 goats and 1 sheep in the little garden right in front our window. They did it so gently and with respect. And then after each animal there was a lot of work to do before they started on the next one. They skinned it, cleaned the meat, cleaned the floor; it all took more than an hour. By the time they were done with their sheep,  it was already noon.

The air had been filled with the smell of sheep for days. We saw sheep everywhere. We even saw one in the (open) boot of a car. To add to our amazement at seeing so many animals in town, we saw a chicken falling off the rooftop terrace of our building. It was very offended and said “bokbokboook” and couldn’t be found for another hour. As you can imagine, after the Izzlets got over their initial shock,  they were very much entertained. Izzlet2 is waiting for it to happen again. Judging from the reaction of the hen’s owner, I don’t think it happens very often.

The weather is lovely. The sun is hot but there is a strong breeze most of the time. The sea is so so blue. A very dark blue. Tangier doesn’t really seem to be a holiday destination though. It is a port city, the Northernmost tip of Africa. [edit: my mistake, according to Wikipedia it is the most North Western point of mainland Africa,  the Northernmost point of Africa is in Tunisia]. There are many French Muslims here, coming to live where they feel more welcome. Yet ironically there are also others from other parts of Africa looking to find their way into Europe, expecting a better life.

We are here to study Arabic. After settling into life here, alhamdulillah it is really good to be studying hard. I’m writing in these books avec des pages grands carreaux after a very very long time. 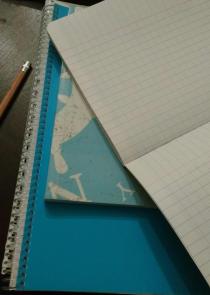 The kids are learning French  and Arabic and I also get to practice my French. The locals speak Darijah, a dialect of Arabic. They usually understand standard Arabic but will only reply in their dialect, which we’re not finding very easy to understand. Most speak or at least understand French but rarely do you find anyone who can speak English.

Now that I have given you some background information, I will finally answer AFizzle’s burning question, what about food?

Well, people eat bread here. The standard is a semolina flat bread which we buy fresh from the bakery every day. And alhamdulillah, it agrees with everyone’s stomachs. I inquired as to what Moroccans have for breakfast. I was told bread dipped in olive oil. Or in olive oil mixed with honey. So that’s what I have for breakfast. The Izzlets are less convinced by the yumminess of such a simple breakfast and so this is their breakfast (and mine). The fig jam is absolutely delicious. All the fruit is so sweet here. And abundant alhamdulillah. 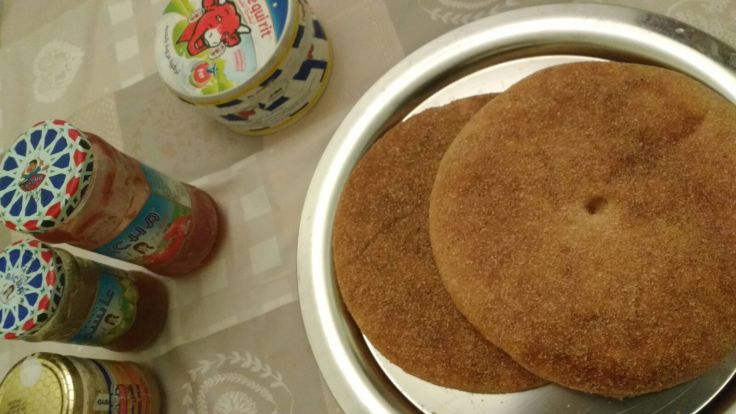 Another discovery I made is that they eat barley here! They have khubz belboula and couscous belboula. That’s bread and couscous made out of barley. So I trialed a barley porridge recipe I found made out of couscous belboula, called hssoua belboula. It’s basically the barley couscous (also called couscous à la semoule d’orge) boiled for about half an hour in water and milk until it has a porridge like consistency , then you add some butter and honey before serving. It could be done with pearl barley,  but would require longer soaking and cooking times. 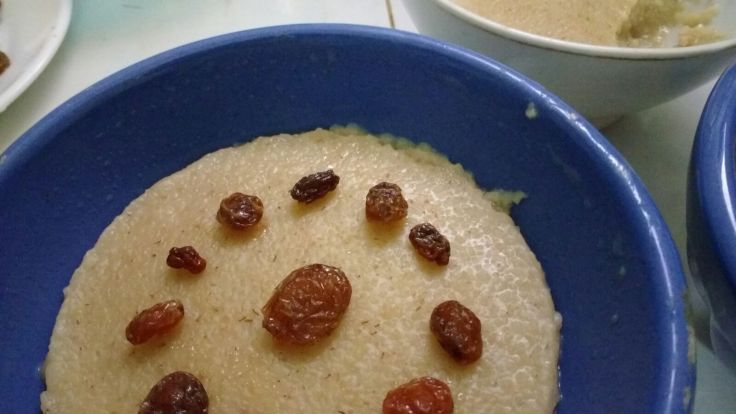 Our neighbours kindly sent us 4 skewers of barbecued liver with onions and fulful (I leave my youngest of sisters to figure out what that is). It was delicious, simply sprinkled with salt and cumin. We were quite excited to eat it after smelling the barbecue that we forgot to take pictures before eating. The next day we got some meat cooked with berkouka (prunes). Really delicious. This time we remembered to take a picture before we ate too much.

Note: I feel I should translate the Arabic I’m using. One would hear these words in any country with a sizeable Muslim population:

Alhamdulillah: Praise be to Allah. It is used to as an indication of gratefulness as well as an acknowledgement of God’s blessings upon us.

InshaaAllah: If Allah wills. It is used when speaking about something you mean to do in the future or something you expect to happen. It is an acknowledgement that only God has the power to make it happen.