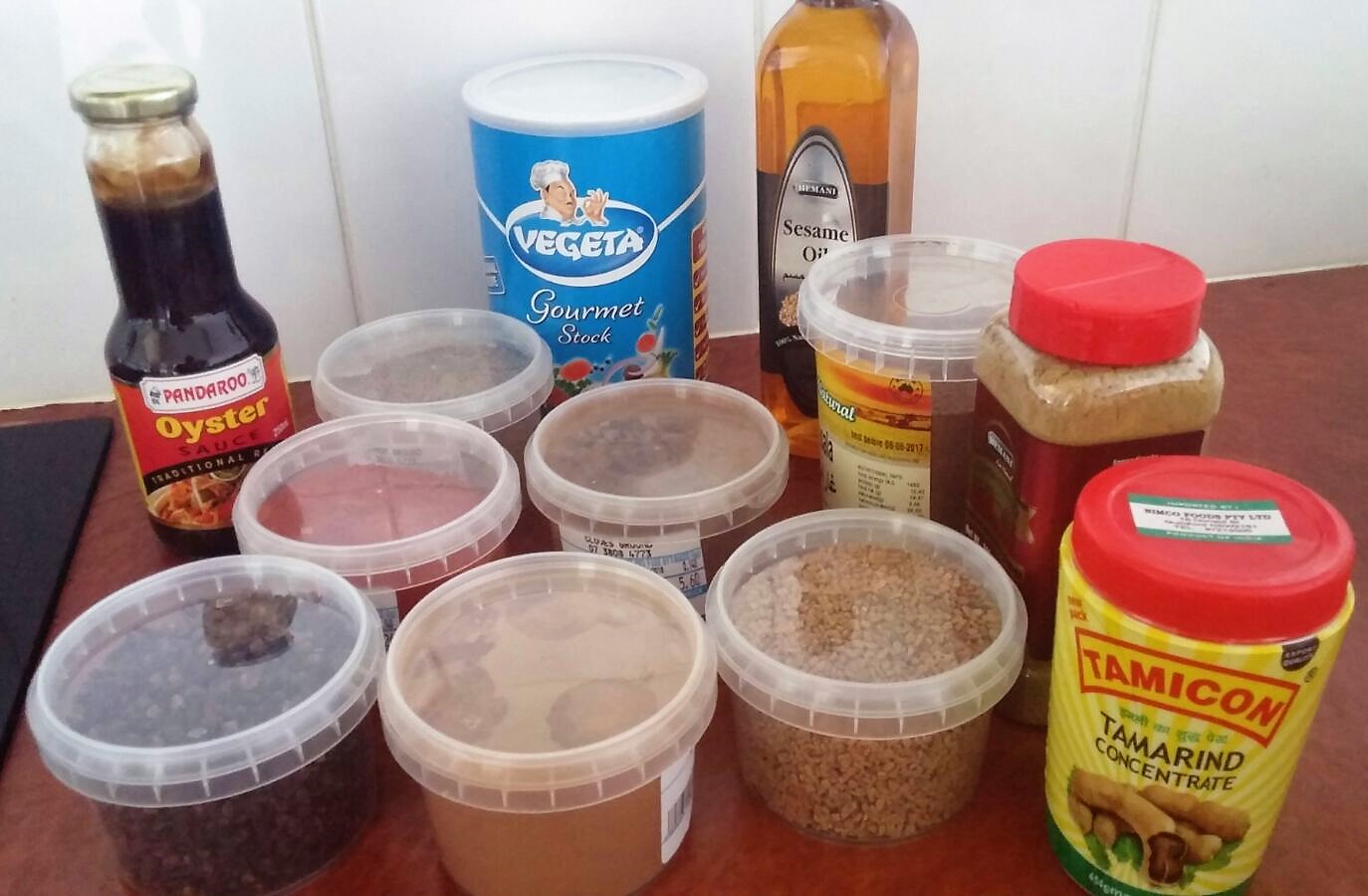 While we were discussing life, I may have forgotten all about trivial things like time and food, until Mr. Kizzle’s presence on my phone reminded me of human need to consume nutrients, so I panicked a bit (because it was quite late) and then quickly made a panicky meal.

By panicky meal, I mean I did not know what to do and improvised as I went and ended up finding pasta and boiling it. And throwing a bunch of spices, ones that I had just bought and am super excited about (as you can see in the photo) in a bowl with minced meat, and throwing it on the stove (properly in a pan, not just wildly flinging it onto the stove itself)

I also made salad, because some people eat such things. I, um, maybe shouldn’t have put the juice of half a lemon in a small bowl made for one person, but what is done cannot be undone. Instead of salad, we just called it soup instead.

Anyway, everything was so panicky, I didn’t even take photos. The salad soup may have been a bit…lemony, but can I get a huzzah* for spices? I liked the meat thing I made. I don’t even really know how I made it, but spices > no spices…

So anyway, some spices/flavors that most people should try to have in their homes, in my humble (but also Very Very Important) opinion:

Cumin (I love this spice more that words can say- It’s lovable- so it’s Data from Star Trek )
Mustard Seeds (I love this spice almost as much as Cumin. We’ll say it’s Zuko from Avatar cuz he’s cool like that, and also must be dealt with carefully or will be bitter)
Cloves (Good for flavor, but can betray you at times- Smeagol/Gollum)
Cardamom (Evil, Crazy, but also sometimes necessary, Azula)
Cinnamon (Gimli. AFizzle is a big Fan)
Chilli Powder (Oy, MamaFizzle, don’t laugh at me. Darth Vader. He’s on your side in the end)
Turmeric (Legolas, cuz he’s blonde)
Fennel (Sometimes one must have things one is not sure why one has it- JarJar?)
Coriander Powder (I feel like this is the old, wise one of the group- so Gandalf)
Garam Masala (It’s a mix, but a beloved tried and tested one, so let’s call it Obi Wan)
Ginger Paste (Lazy but useful- Pippin)
Garlic Paste (SameSame- Merry)
Dried Basil (B1 from bananas in pyjamas)
Dried Oregano (B2)
Soy Sauce (My best friend in the kitchen. The smartest- Hermione)
Vinegar (Worf? He’s a bit sour sometimes, but everyone loves ‘im)
Black Pepper (Angelica from Rugrats. She’s full of character)
Salt (Captain of the ship! Captain Picard)
Tamarind Paste (Much love for this one from Moi. Cool and unapologetic. Toph!)
Oyster Sauce (C-3PO, don’t ask me why)
Fish Sauce (R2-D2, goes hand in hand with the previous ingredient)

Spices/Flavors that I am excited to try:

Vegeta (I pronounced it wrong, apparently the g is a ‘gue’, not a ‘je’)
Sesame Oil (Most people probably already have this, but I see it everywhere, and I’ve never used it! Also , highly recommended by ShFizzle)
Fennugreek (I feel like MamaFizzle has been telling me to have this since I grew fingernails**)

*The word huzzah comes from hurray, which was apparently adopted from the Mongols as a result of Genghis Khan’s impressive often misrepresented reign. Ask AFizzle.

**This happens around week 12, before birth itself. I have an image of MamaFizzle advising eating Fennugreek to her unborn child (Moi).