Once upon a time, on a cold winter’s day in a land far north, a small round cutey potato entered the world.

This wonderful chubby being grew into her infant years fed with much love, and much Nutella.

Such chocolatey goodness was the driving force with which she propelled herself through her toddler-sized days. Even a life altering journey across oceans and continents could not part her from her cocoa-based companion. Nutella greeted her tropical mornings and fuelled her youth with joy and comfort as she savoured it by the spoonful.

As she grew, so too did her Nutella jars, as if to match her ever-expanding affection for her life-long friend, her soul mate.

Nutella betrayed her. Our now teen-sized cutey potato could no longer associate with her once most trusted source of solace without it attacking her; body and soul. This anguish was borne for years before she accepted the truth. Things could never go back to the way they were.

Alone and in mourning, she continued on in life; reminiscing, dwelling on times gone by, questioning, had Nutella ever truly been her friend? Had it all been a ploy? A palm-oil shaped sugary deception?

In time she learned to put her past in its place, to accept that a love once lost could never be replaced…But what if it could?

Simply seek out some hazelnuts. (To make one Nutella jar I used ½ a cup of hazelnuts) Roast ‘em. The more roasted they get, the nuttier it will taste so do this according to your preference. 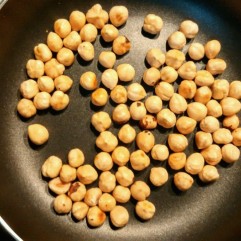 Let the hazelnuts cool for a bit and then put them in a grinder. Keep going in bursts till you get hazelnut butter. My grinder gets hot very quickly for dry ingredients so I prefer to give it time to chill between bursts. This grinder plays an essential role in my life and it would be extremely unwise to mistreat it. It is especially important throughout this entire Nutella process. 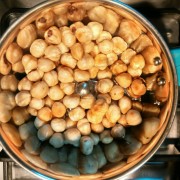 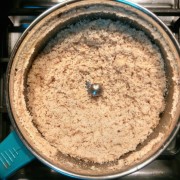 I believe one can do this with melted chocolate but I chose to utilize 2 generous tablespoons of cocoa powder. Also some vanilla and 3 tbs coconut oil (I think this is quite important for a classic Nutella texture. Also much better for you and the planet than palm oil.) I used a whole 5 tbs of brown sugar because as I was testing I lazily jumped from 3 to 5. I’m thinking 4 might also have worked but do this to taste.

Now at this point it’ll look beautiful but not quite perfect yet. The part that changes everything: just under ¼ cup of water. One can use milk instead I guess but if one is as sensitive to such things as moi then maybe stick to water. This should refridgerate to a nice spreadable texture. 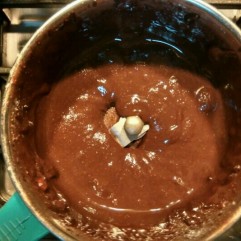 For it to truly be perfect, make use of one of the many Nutella glasses that one may have accumulated over nearly two decades. Pop that Nutella lid on:

And there you have it. A lifetime of drama resolved in a grinder.

And she lived happily ever after.

5 thoughts on “Nutella: A Love Story”