You know what we all share (besides being overall pretty awesome)? No? Tis our mutual love for spinach of which I speak. What we don’t all share however is my high regard for capsicum. SFizzle and Brother, together you have been deprived of this but you are both forgiven on account of your aforementioned brilliance.

Anyway today I needed a solution to yesterday’s potato problem, so I requested ShFizzle’s capsicum pesto recipe. These were my instructions:

And this is what I ended up doing:

I also cooked some mushrooms in case it all ended up tasting awful. It turned out wonderful but the mushrooms were appreciated regardless.

So there you have it. Tis a universal truth that everything is better with a spinach upgrade.

UPDATE: My latest version is much prettier. 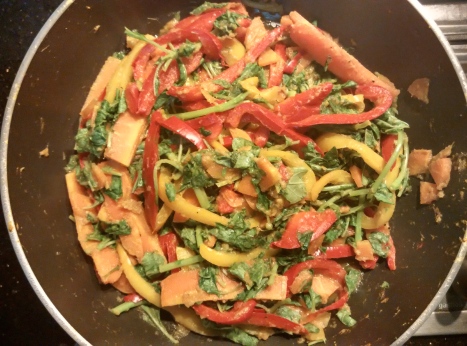